April 22, 2021 at 6:30 AM EDT
Maintains world-class execution in core metallurgical segment
Drives toward Q3 2021 startup of Leer South longwall, on time and on budget
Delivers on two-pronged thermal strategy of generating cash and rationalizing footprint 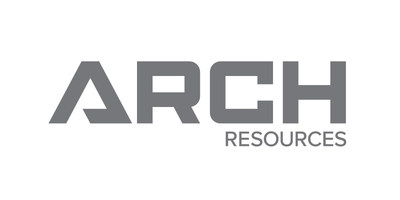 In the first quarter of 2021, Arch significantly advanced its strategic priorities as the company:

"The Arch team maintained its world-class execution in the first quarter of 2021, once again delivering operational excellence in the key areas of cost control, safety and environmental stewardship," said , Arch's chief executive officer.  "Notably, our performance improved steadily as the quarter progressed, in lockstep with the expanding availability of the COVID-19 vaccine and declining rates of infection at our operations.  We expect to continue our positive operational and financial momentum in the second quarter, and to achieve a significant step-change in our overall performance in the third quarter with the startup of the Leer South longwall.  Coupled with our intensified focus on long-term reclamation activities at our legacy thermal mines, Arch is extremely well-positioned to complete our strategic transformation into a pure play metallurgical coal producer in an accelerated fashion."

During the first quarter, Arch maintained its intense focus and exemplary performance across a wide range of environmental, social and governance (ESG) metrics.  Arch's subsidiary operations achieved a lost-time incident rate of 0.58 per 200,000 employee-hours worked, which was nearly 40 percent better than Arch's industry-leading 2020 average.  Arch also achieved a perfect score in both regulatory and water quality compliance.  In addition, Arch reported continuing reductions in its Scope 1 and Scope 2 GHG emissions, which have been reduced by 55 percent since 2013, due in large part to the company's strategic shift towards higher-value but lower-volume metallurgical products.

With its strategic shift towards metallurgical products – which are an essential input in the production of new steel – Arch has realigned its value proposition to reflect the global economy's intensifying focus on de-carbonization.  Arch believes that a significant amount of new steel will be required in a de-carbonizing world, given steel's importance in urbanization, infrastructure replacement and the construction of essential de-carbonization tools such as mass transit systems, wind turbines and electric vehicles.

"The Leer South team continues to hit milestones, on time and on budget, as they prepare for the third quarter startup of the longwall," said , Arch's chief operating officer.  "I'm pleased to report that all 212 longwall shields are now on site, development of the first longwall panel is nearing completion, and work on the underground setup room for the longwall mining system is well under way.  The entire operations and marketing team is energized and ready for the rapidly approaching startup."

During the first quarter, Arch invested a total of at Leer South and has now expended a total of on the project net of the previously announced insurance recovery associated with the lost shields at Mountain Laurel.  As previously indicated, Arch expects total capital spending on the project to come in at the high end of the original guidance range of to .

With the addition of Leer South, Arch expects to expand its High-Vol A metallurgical output by an incremental 3 million tons annually; enhance its already advantageous position on the global cost curve; strengthen its coking coal profit margins across a wide range of market conditions; and cement its position as the leading supplier of High-Vol A coking coal globally.

During the first quarter, Arch made meaningful progress on its dual objectives of generating cash from its legacy thermal assets while driving forward with an accelerated reclamation plan at its operations.  The thermal segment achieved solid margins despite less-than-ratable volume levels, while expending little capital.  Further, Arch completed work totaling towards the reduction in asset retirement obligation, and an additional towards the reduction in Black Thunder's ARO.

"We are methodically harvesting value and cash from our legacy thermal assets, while working down our long-term closure obligations in a systematic and measured way," Lang said.  "The team's objective is clear as we drive forward in completing the company's strategic transition towards steel and metallurgical coal markets, while remaining committed to our environmental stewardship across our operations."

As previously announced, Arch plans to discontinue production at the mine by the end of 2021, and to reduce the mine's total ARO by an estimated , or approximately 80 percent, by mid-2022.

"After overcoming virus-related challenges early in the quarter, our core metallurgical segment finished strong and turned in solid results in the first quarter," Drexler said.  "Despite less-than-ratable production and shipping rates, we achieved coking coal costs of less than per ton and maintained our durable position as one of the metallurgical coal industry's lowest cost operators.  Once again, the Leer mine led the way, delivering costs in the -per-ton range, further underscoring the great potential of its companion mine, Leer South."

With the rapidly diminishing operational and economic impacts of the pandemic and the seasonal resumption of shipping on the , Arch expects metallurgical sales volumes to increase by 15 percent in the second quarter, and to increase still further in the year's back half, buoyed by the startup of Leer South.

Arch expects the second quarter results of its legacy thermal portfolio to be generally comparable to the segment's first quarter performance, as projected increases in export volumes from the West Elk mine in are expected to be offset by weak domestic shipments due to still-inflated power plant stockpile levels and typical power demand softness in the spring months.

Arch ended the first quarter with cash, cash equivalents and short-term investments of , and total liquidity of approximately .

As previously disclosed, Arch issued in tax-exempt bonds in early March, at a highly competitive interest rate of 4.125 percent.  The proceeds are being used to fund the ongoing construction of the preparation plant and other waste management facilities at Leer South.  At the end of the quarter, Arch had approximately of restricted cash that will become available for use as qualifying work is completed.

"With the completion of the second phase of this tax-exempt offering, Arch is poised to complete the Leer South buildout while maintaining a healthy and prudent level of liquidity," said , Arch's chief financial officer.  "Following the ramp-up of the new longwall, we intend to prioritize debt reduction and further fortify our already sound balance sheet, in advance of ultimately resuming a measured capital return program."

Any future capital return program remains subject to ongoing board review and authorization.

metallurgical markets remain solidly supported, as the resurgence in global steel production has buoyed coking coal demand while acting to counterbalance the adverse effects of politically driven Chinese import restrictions.  Steel output appears on course to recover to pre-pandemic levels as soon as this year; steel prices in all major markets remain at historic highs; steel mill capacity factors have rebounded to healthy levels; and key importing countries, such as , are returning to the seaborne market to satisfy pent-up coking coal needs.

prompt metallurgical price assessments continue to enjoy a to per ton premium compared to premium Australian coals, and Arch continues to see strong interest in its yet-to-be-committed coking coal volumes.  In addition, while Chinese import restrictions on Australian metallurgical coals have acted to dampen aggregate seaborne coking coal demand, Arch continues to explore opportunities – both strategic and opportunistic – to increase its direct metallurgical sales into , which has sourced only modest volumes from the in the past.

During the quarter, Arch committed an additional 500,000 tons of metallurgical coal for delivery in 2021, bringing total commitments for the current year to 6.8 million tons and leaving just 1 million tons still to sell at the mid-point of guidance.

"We remain sharply focused on executing on our clear and actionable strategy for long-term growth and value creation," Lang said.  "Supported by an accelerated global recovery, the advancement of infrastructure-driven stimulus efforts, and the build-out of a new, low-carbon economy, steel demand remains robust and poised to continue its upward trajectory.  With our low-cost metallurgical assets, premium High-Vol A product slate, industry-leading ESG performance, top-tier marketing and logistics expertise and best-in-class growth project, we believe Arch is well-positioned to drive long-term value creation for our shareholders."

is a premier producer of high-quality metallurgical products for the global steel industry.  The company operates large, modern and highly efficient mines that consistently set the industry standard for both mine safety and environmental stewardship.  from time to time utilizes its website – www.archrsc.com – as a channel of distribution for material company information.  To learn more about us and our premium metallurgical products, go to www.archrsc.com.

Forward-Looking Statements: This press release contains "forward-looking statements" – that is, statements related to future, not past, events. In this context, forward-looking statements often address our expected future business and financial performance, and often contain words such as "should," "appears," "expects," "anticipates," "intends," "plans," "believes," "seeks," or "will." Forward-looking statements by their nature address matters that are, to different degrees, uncertain. For us, particular uncertainties arise from the COVID-19 pandemic, including its adverse effects on businesses, economies, and financial markets worldwide; from the impact of COVID-19 on efficiency, costs and production; from changes in the demand for our coal by the steel production and electricity generation industries; from our ability to access the capital markets on acceptable terms and conditions; from policy, legislation and regulations relating to the Clean Air Act, greenhouse gas emissions, incentives for alternative energy sources, and other environmental initiatives; from competition within our industry and with producers of competing energy sources; from our ability to successfully acquire or develop coal reserves, including the development of our Leer South mine; from operational, geological, permit, labor, transportation, and weather-related factors; from the effects of foreign and domestic trade policies, actions or disputes; from fluctuations in the amount of cash we generate from operations, which could impact, among other things, our ability to service our outstanding indebtedness and fund capital expenditures; from our ability to successfully integrate the operations that we acquire; from our ability to generate significant revenue to make payments required by, and to comply with restrictions related to, our indebtedness, including our ability to repurchase our convertible notes; from additional demands for credit support by third parties; from the loss of, or significant reduction in, purchases by our largest customers; from the development of future technology to replace coal with hydrogen in the steelmaking process; and from numerous other matters of national, regional and global scale, including those of a political, economic, business, competitive or regulatory nature. These uncertainties may cause our actual future results to be materially different than those expressed in our forward-looking statements. We do not undertake to update our forward-looking statements, whether as a result of new information, future events or otherwise, except as may be required by law. For a description of some of the risks and uncertainties that may affect our future results, you should see the risk factors described from time to time in the reports we file with the .